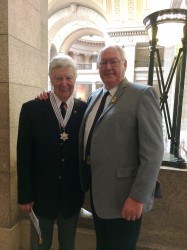 Manitoba Sports Media legend Robert J. (Bob) Picken was one of a dozen Manitobans honoured Thursday, July 13 for their contributions and accomplishments by investiture in the Order of Manitoba.

Picken, pictured with Curling Canada Chair-Elect Resby Coutts after the ceremony at the Manitoba Legislature, was recognized for a sports media career spanning six decades as well as for his contributions to the Manitoba sports community.

Among many, Picken’s resume includes a term as President of the Manitoba Curling Association. He was the World Curling Federation’s first Media Relations Officer.

Bob Picken is recognized as a mentor by a long list of sports journalists and broacasters who have worked in Manitoba during the span of his career.

The complete listing of the 12 new members of the Order of Manitoba, including an outline of their accomplishments, can be found on the website of Her Honour Lieutenant Governor Janice Filmon.