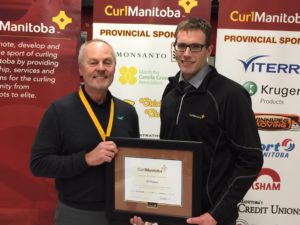 The award, which was announced earlier at the CurlManitoba Annual Meeting, was applauded heartily by the Altona Curling Club volunteers, local dignitaries Altona Mayor Mel Klassen and Rhineland Reeve Don Wiebe, and by the nearly 180 curlers and coaches assembled from across Manitoba.

In presenting the award, CurlManitoba Executive Director Craig Baker noted Friesen’s long history of volunteerism in the Altona Curling Club as well as his service at the provincial level. He served a four year term on the Board of the Directors of the former Manitoba Curling Association at the time of its transition into the new-model CurlManitoba. He also served as co-chair of several previous provincial championships in Altona including a Senior Men’s, Senior Women’s and a Scotties championship.

Friesen helped promote the idea of bringing the Canola Juniors to Altona as a joint dual event, featuring both the best junior men and the best junior women curlers in the province. The event is being played in the Millenium Exhibition Centre, featuring the four sheet curling club and four sheets of arena curling ice under the same roof. It is the second time in three years the Manitoba Junior titles will be determined on arena ice.

The championship will wrap up Sunday in Altona with the two final games to be played at 4PM on Sunday, December 31.